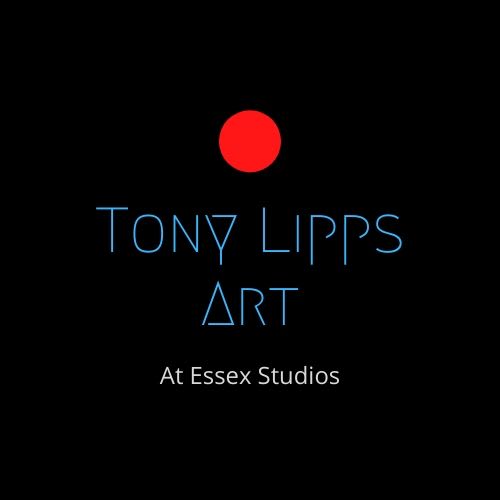 Tony Lipps works out of a space at Essex Studios in Cincinnati, Ohio since 2015. He attended Kent State University's Fine Arts program from 2001-2005. In 2005 Lipps returned to Cincinnati and joined the Hamilton County Sheriff's Office, where he served for 13 years as a Deputy in corrections for 6 years and as a Patrol Officer for 7 more years. While at the Sheriff''s Office, Lipps still created art as a hobby, working on commissioned paintings and donating many paintings to multiple causes during that time. Lipps has had artwork displayed in the Cincinnati Reds Hall of Fame Museum and in an exhibit represented by the Reds Hall of Fame at the Fitton Center in Hamilton, Ohio, just north of Cincinnati. When the MLB All Star games came to Cincinnati in 2015, Cincinnati Art Galleries held a baseball themed juried exhibit where Lipps sold his painting of Pete Rose, titled, "Charlie Hustle", in the first night of the exhibit's opening. Lipps sold a commissioned piece to former Cincinnati Bengal, Domata Peko, and was recognized on the local news stations in multiple interviews showcasing his artwork. Lipps has made commemorative portraits for many police officers from multiple departments and donated original paintings to benefits ranging from the American Heart Association to cancer benefits. In 2019, Lipps won Best in Show at "A fair of the Arts" in Anderson, Ohio. In June of 2021, Lipps held his first solo exhibit at The Eisele Art Gallery, displaying his cityscape paintings and sold 2 original paintings. LIpps continues a journey to enhance technique and subject matter to further build his background in painting. In May of 2022, Lipps joined a team of artists, led by Eileen Dorsey, in Columbus to paint a mural in the new Barrio's Restaurant.

Lipps is married to Libby Beiting-Lipps and is father to his two sons, Julius and Remy. With the support of his wife, Lipps has been able to pursue his life as an artist full-time.

Lipps's art uses a progressive, contemporary approach with layers of paint and textures mixed with blending techniques to give the subject matter life and movement. He uses bright colors to pull the foreground towards the viewer to emphasize a sense of depth. With an application technique of brush strokes mixed with pallet knife mark making, Lipps's paintings combine textures and implied shapes to create his images. Lipps's work has a slight feel of realism blended with imperfect marks to balance the expressive qualities found in impression paintings and the clean details of photo realist paintings to bring life to the painting. Lipps's main goal in his development as an artist is ultimately to create a raw piece of work that allows the viewer to see the process in the painting without distracting the viewer from seeing the qualities of the subject matter.

Prior to Lipps's current urbanscape projects, he focused his efforts on sports paintings and portraiture as he searched for his direction as an artist. By painting sports scenes, Lipps was able to hone his expressive nature in his paintings and perfect his technique for applying paint to canvas.

Currently, Lipps is working on a new project that focuses on the human figure, using the movements of ballet dancers to capture "bodies in motion."

The presence of this badge signifies that this business has officially registered with the Art Storefronts Organization and has an established track record of selling art.

It also means that buyers can trust that they are buying from a legitimate business. Art sellers that conduct fraudulent activity or that receive numerous complaints from buyers will have this badge revoked. If you would like to file a complaint about this seller, please do so here.

This website provides a secure checkout with SSL encryption.

The Art Storefronts Organization has verified that this Art Seller has published information about the archival materials used to create their products in an effort to provide transparency to buyers.

WARNING: This merchant has removed information about what materials they are using in the production of their products. Please verify with them directly.

Your cart is currently empty.

This is only visible to you because you are logged in and are authorized to manage this website. This message is not visible to other website visitors.

This means you can use the camera on your phone or tablet and superimpose any piece of art onto a wall inside of your home or business.

To use this feature, Just look for the "Live Preview AR" button when viewing any piece of art on this website!

Below, select which favorite lists you would like to save this product into.

This means you can use the camera on your phone or tablet and superimpose any piece of art onto a wall inside of your home or business.

To use this feature, Just look for the "Live Preview AR" button when viewing any piece of art on this website!

Enter your email below and we'll email you a 20% OFF Coupon right now!

This offer is valid for NEW CUSTOMERS only!